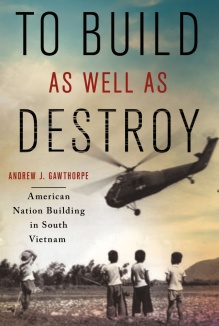 “Andrew Gawthorpe’s book is an excellent study of the CORDS program implemented by the United States in Vietnam between 1967-1973. I know of no other book that covers the pacification effort in such detail. This work is a significant contribution to the literature on American nation-building efforts in Vietnam.”

“Andrew J. Gawthorpe brilliantly and convincingly demonstrates that Vietnam was no lost victory. In To Build as Well as Destroy, he shows that, despite the assurances of counterinsurgency technocrats, T.E. Lawrence folklorists, and nation-building soldiers, pacification proved to be a failed doctrine for a failed war.”

To Build as well as Destroy: American Nation-Building in South Vietnam,  is forthcoming from Cornell University Press.

The Vietnam War calls to mind both massive firepower and shadowy guerilla combat.  What is less often appreciated is that South Vietnam was the site of the most ambitious and well-resourced attempt at nation-building by the United States since World War II.  This is the story of To Build as well as Destroy.

Drawing on research in over ten archives, the book is a first of its kind: a thorough case-study of a hubristic nation-building effort whose narrative stretches from the Washington agencies in which policy was designed down to the individual villages in which it was implemented.

The book also provides the most comprehensive history yet of the Office of Civil Operations and Revolutionary Development Support (CORDS), a nation-building agency which was unique in history in the scale of both its resources and ambition.